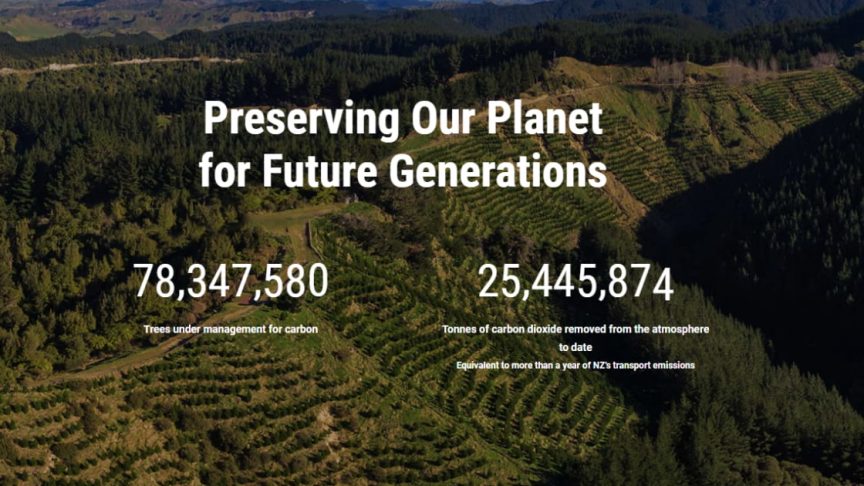 The Government’s own assessment, provided in the country’s first Emissions Reduction Plan released by Climate Change Minister James Shaw in May, highlighted that removing exotics from the permanent category would increase emissions by 45 million tonnes by 2035. This is the equivalent of more than two years of road transport emissions – a shortfall that would need to be made up through the purchase of offshore credits.

The financial cost of that shortfall is even more significant. According to a study by independent economists Infometrics, more than $64 billion would be taken out of the economy over 15 years were the proposal to become regulation.

Infometrics says the proposal not only impedes the actively managed transition of exotic forests to natives and its associated environmental benefits, but preliminary modelling reveals that by 2035, the extra cost to meet the country’s emissions reduction targets will be an average of $330 per person per year. By 2050, the cost would increase to over $1000 per person per year.

Of that $64 billion cost, Infometrics estimates $35 billion would be transferred offshore to make up for the gap created in the country’s emissions reductions budget.

While the Government has been at pains to emphasise that no decisions have yet been made on the proposal, and Ministers appear to be making every effort to canvas the views of Iwi, foresters and landowners, the exercise has served to quantify how extremely important the actively managed permanent forestry sector is.

In a response to an inquiry from news organisation Stuff in June, the Ministry for the Environment outlined the Government’s five highest-performing projects in its newly released Emissions Reductions Plan. The projects include the increase of the carbon price in the ETS, a new agricultural research centre, a biofuels mandate and funding to replace coal boilers.

The Ministry for the Environment estimates that combined, these projects will reduce emissions by between 4 and 9 million tonnes of CO2 over the next 3 years, at a cost of over $1 billion. To put that in context, over the same period, NZCF’s 100,000 hectares of owned and leased forest land will capture 7.5 million tonnes of CO2 – at no cost to the taxpayer.

But there is also broader value in the sector which is only now becoming recognised.

According to Ngā Pou a Tāne, the National Māori Forestry Association, the opportunities for investment and participation in the carbon economy, regional and social development and environmental improvements are worth at least $7 billion to the Māori economy. Given approximately 55% of Whenua Māori is currently in forestry and 80% of Māori land is in the marginal and low productivity land use category (LUC 6-8), the organisation says the opportunity is potentially transformative for Iwi and Māori landowners and is a once in a century opportunity to enable Māori to build their own wealth on their lands.

The sector, and operations that are focusing on transitioning from a nurse crop of exotic trees to a biodiverse native forest in particular, could also provide far greater value in terms of investment in the rural economy.

The process of actively managed permanent forestry to support transitioning from initial exotic planting to indigenous forests creates 25% more local jobs than sheep and beef farming on low-productivity land, according to a new study by PricewaterhouseCoopers Consulting. The Employment impact of different rural land uses report updates employment analysis prepared for Te Uru Rākau by PwC in 2020, utilising more up-to-date information and focusing on the specific set of land uses considered, as well as local employment rather than that created elsewhere.

The PwC report found that of the three land uses considered, transitioning from exotic to indigenous forests creates the most local jobs with an estimated 6.3 local FTEs per 1,000 hectares, compared to 4.7 for sheep and beef farming on low productivity land and 2.0 for permanent carbon forestry. The larger number of jobs created by transitioning from exotic to indigenous forests were as a result of the additional management activities required to achieve the regeneration.

The specific focus on returns for marginal and low productivity land also reflect a sector which concentrates on the best use of resources – especially that in erosion-prone, steep and hard-to-reach areas.

Owners of this land usually find that it is a drain on overall farm income – costing more in rates than it returns per hectare. The ability to diversify farm income and provide a new, dependable revenue stream on land that is more suitable for supporting trees than pastural grazing, is one increasingly recognised by farmers. Whether it’s for reinvestment, financial stability or succession planning, planting marginal and low productivity land is offering a new option for many rural landowners. To give a sense of the scale of that investment, NZCF alone has returned $95 million to the rural community through lease payments to more than 6,000 landowners over the last decade.

In the – frequently polarised – land-use debate, the urgency of the climate crisis is often lost. With current atmospheric CO2 levels reaching the highest levels in recorded human history, there’s never been a more important time to focus on the need for a proven engine for carbon sequestration.

But, in its abundance of marginal and low productivity land – less than 3% of which would be required to meet New Zealand’s carbon targets, its climate and proven farming and forestry know-how, the country also has an enormous opportunity to invest in the green economy. Rather than transferring our wealth offshore, to buy expensive and uncertain international credits, this home-grown solution could indeed be transformative, for farmers, rural communities, Iwi and the environment.